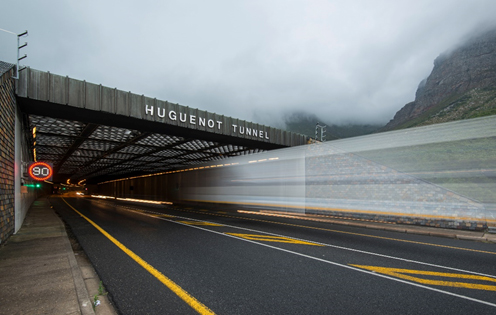 Entrance to the tunnel

Electronic signage at entrance of the tunnel.

Western Cape, 3 September 2019 – The South African National Roads Agency SOC Ltd (SANRAL) met with stakeholders earlier this year to present the operational requirements and time schedule of the Huguenot Tunnel upgrades and how this would impact the road user.
After 31 years of continuous and safe operation, the electrical and mechanical systems have neared its end of life, and are in need of replacement to ensure compliance to international safety standards.
The work has already begun, but in the interest of minimal inconvenience to the road user, work that is able to be completed under live traffic conditions, has been prioritised.

“This bodes well for our overall progress and we are committed to doing as much of the work as possible, under live traffic conditions. In this way, the impact to the road user is little to none,” said Randall Cable, SANRAL Western Region Manager.

The old Du Toit’s Kloof Pass, the R101, which will act as the primary alternate route during the week day, night time Huguenot Tunnel closures, will also receive a facelift with the installation of additional road signs to better indicate passing opportunities as well LED road studs along the entire centre line of the pass. This work will commence shortly and will be completed before the end of the year to aid night time travellers using the pass.

While it may appear to the average traveller that nothing has changed, much of the current work is done behind the scenes. As soon as current operations are complete, the next stage will include the following, some of which will have to occur during the planned closure:
• Replacement of tunnel FM radio re-broadcast system
• Upgrade of tunnel PA system
• 6.6/ 11 kV Switchgear upgrade/ replacement
• Replacement of tunnel fire detection system – while this will be started under live traffic conditions, some of it will only be completed during the scheduled closure.
Originally the off-peak maintenance closures were scheduled to commence in late September 2019, but are now scheduled to commence in middle January 2020. The off-peak closures are to allow for the completion of the remaining works, which will not be possible under live traffic conditions, and will last approximately four months. The times of closure remain as previously communicated, i.e. the tunnel will be closed to traffic, from 10pm to 6am, Monday to Thursday. This is when traffic volumes through the tunnel are at its lowest. This means that the tunnel will be fully open weekdays from 6am till 10pm as well as 24 hours from Friday to Sunday, for all road users.

Motorists are reminded of the alternative routes, which include Paarl –DuToit’s Kloof Pass –Worcester (±62 km), Paarl -Gouda -Tulbagh –Worcester (±121 km) or Wellington-Tulbagh-Ceres (± 74 km.) Depending on origin and destination, the N2 Grabouw to Villiersdorp (41 km) is also an option.

“Where unforeseen changes to the schedule are necessitated, we will communicate these as soon as possible, to ensure that road users are fully informed of the work being carried out and the effects this may have on traffic flow,” concluded Cable.